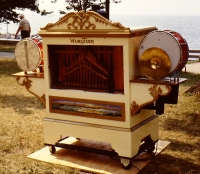 During its years of operation, the music from a number of band organs wafted throughout the park creating a welcoming ambiance.  Little is known about the band organ installed with the park’s first carousel in 1896 except that it was built at a cost of approximately $2000.00. This significant investment by the first owners of the park was an indication of how much they valued the music from the band organ as an entertainment attraction in itself.   An Artizan Band Organ was located under the platform of the Rocket Ships near the lake which you could hear in the distance all the way from the parking lot.  Two identical North Tonawanda band organs also operated at Euclid Beach. One was located at the Japanese Flying Ponies Carousel which operated from 1903 until 1935.  The second delighted riders on the Carrousel (PTC #19) from 1910 until 1969.  A Gavioli Concert Organ was originally purchased by the Humphrey Family for their ice skating rink (the Elysium) in what is now University Circle. It was relocated to Euclid Beach and operated in the Roller Rink until 1962.

Along with the clickety clack of the roller coasters up their lift hills, the screams of the riders, and of course Laughing Sal’s incessant laughter, the sound of the band organs went a long way to create the ambiance all of us who were lucky enough to have visited the park remember.  To help celebrate this fiftieth anniversary of Euclid Beach Park’s final day Euclid Beach Park Now will host a band organ rally.  Once again their music will be heard on the park’s grounds as a reminder of years gone by.  The 15th annual Remembering the Sights and Sounds of Euclid Beach will be held on Sunday September 29th, 1:00 pm – 5:00 pm, rain or shine with free admission and parking.  The event is held at the current Euclid Beach Park, 16301 Lake Shore Boulevard, Cleveland, Ohio  44110, just east of the original park entrance across from the Collinwood Recreation Center. For more information visit: www.euclidbeach.org  or call 440-946-6539.