Give Box Cleveland is OPEN for giving and taking 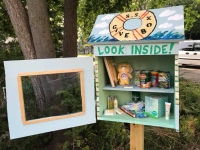 Give a little - add your own contribution to the first give box in our neighborhood on Lakeshore Blvd - any time that works for you.

Over the past few years, Little Free Libraries popped up in our neighborhood thanks to caring stewards and the understood importance of literacy. Now, there is a new way to give and take – everything from little toys to non-perishable food, from toiletries to notes of positivity, and yes, even books.

Introducing Give Box Cleveland, an offshoot of the Little Free Pantry project - the Arkansas-based project begun in 2016 by a woman who saw a need in her community and the power to fulfill it. Earlier this year, I pitched the idea at a competition in downtown Cleveland and gained a construction partner in the process. Over the summer, youth employees through YOU from eastside Cleveland neighborhoods earned an OSHA certification and gained carpentry skills in a vocational program hoste by the non-profit Kids of the 2016. These youth built weatherproof, wood boxes on sturdy posts and in July volunteers came together to paint the first few give boxes.

Now, two give boxes have been installed – one in Central (Carver Elementary School) and one in Collinwood (at an RTA stop on Lakeshore Blvd just west of E.156th Street) and for the past few weeks have been facilitating “invisible” exchanges between neighbors. One afternoon the box on Lakeshore was full of dental floss and peanut butter jars, the next day books on Lake Erie and Band-Aids. These pantries are always open and do not discriminate – anyone is free to give and take as much or little as they need to improve their quality of life.

These pantries exist in nearly 100 locations including in Akron and Berea, but just made their debut in Cleveland in August 2018 where they hold much more than just food! Give Box Cleveland brings the concept to Cleveland neighborhoods, activating community engagement to fill an immediate and local need and increase charity and neighborliness.

Want to get involved? Check out facebook.com/giveboxcle or find the box and add your own contribution any time that works for you. Many of us have an extra can of soup, box of tissues, or other new items we do not need. Others can give by writing a few notes of encouragement on a sticky note. After all, it’s often the simple gestures that have the greatest impact!

Allison is a North Shore Collinwood resident, architect, artist, neighborhood cheerleader and frequent contributor to the Collinwood Observer. She curates "Phone Gallery", founded "Bus Stop Moves", upcycles street and beach trash into art and serves on the Board of Directors of Northeast Shores.