My Collinwood: Living on Lake Erie 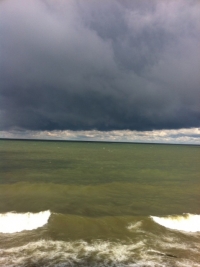 Living on Lake Erie is awesome. And I have proof to back that up.

When I’m not working, crafting, or writing love letters to my new neighborhood I can be found studying up for the ultimate rite of passage in architecture: Licensing Exams.

A series of seven exams, each focuses on a specific topic ranging from the perils of mid-century modern urban planning to classification of soil plasticity, grain size, compaction strength, and so on. Once the exam is completed, an ordinary, folded piece of paper comes through the mail announcing your status as a capital ‘A’ Architect… so long as you keep up with continuing education credits, professional fees, and fulfill other elusive requirements shrouded in secrecy. But I digress.

Just over the half-way hump, my most recent exam preparation rendered fact my belief that living along the sandy shores of Lake Erie is as close to perfection as it gets in Northeast Ohio. You see, in the Greater Cleveland area we are governed by our macroclimate, which is largely a result of altitude, or the sun’s low angle to the earth. From East to South to West we experience the four seasons, similar spikes in humidity, and snow, snow, snow.

However, for those of you who have battled a few Old Man Winters from the shoreline, you know as well as I do that the dreaded “Lake Effect Snow” isn’t as troublesome as our neighbors in the Heights perceive it to be.

Why? Because living in proximity to water tempers our environment, allowing for a moderate microclimate. While the actual beach may be frigid and plagued with damp air, and unprotected higher elevations to the south receive the brunt of the precipitation load, our neighborhood’s position mid-way up the hill is ideal. The water retains heat and this added warmth in the winter pushes the cooler temps and snow beyond our tiny enclave, precluding us smarties living in North Collinwood from shoveling intense snowfalls.  Rain? Yes. Wind? Oh, yes, but I’ll gladly strap on a pair of wellies and leave the snow angels to the folks out East, West, and South of us.

A few weeks ago, in Mid-October, the city was in a tizzy. My Facebook and Twitter newsfeeds (reliable sources of trending topics) burst with photos of snow-laden streets. Crisp orange and yellow leaves peeked out from under a fresh layer of ice, and as if obligatory, friends posed for photos with their cars, buried in inches of white fluff. From Lakewood to Geauga, a continuous cycle of begrudging weather reports refreshed on my screens.

I too, was caught in a slush mix leaving Cleveland Heights late one night and faced off with the thunder/snow in University Circle the next morning. But as if entering an invisible protective bubble - its barrier conveniently tied to Route 2’s Lakeshore Boulevard exit ramp - North Collinwood remained snow and slush free to-and-fro my journey home. A gentle rain pitter pattered against my windows and I felt compelled to turn down the heat as the temperature gauge slowly climbed out from freezing.

As I rejoiced in my tiny weather bubble I felt a ping of grief for those battling this early-season storm without electricity due to downed trees unable to bear the load of wet leaves and snow-covered limbs. But then again, I’ve encouraged them all (at least once) to join me up here. Large and varied housing stock, a transformative streetscape project underway, and plentiful options for recreation, less intense weather is the latest and greatest reason to move to Collinwood.

Someday soon we’ll have to take down the hammock, clear the candles from the front porch, and surely snow will fall on the hibernating rose bushes. Lake Erie is far from Florida and I don’t anticipate or desire a snowflake-free holiday season. But for those fleeting moments in October, when the rest of North East Ohio fretted over unplowed roads, falling sheets of ice, and overall blustery conditions, I felt even luckier to be living on Lake Erie.

Allison is a new Collinwood resident, artist, and neighborhood cheerleader loving her sunset views over Lake Erie, Waterloo Arts, the pool at the rec center, Project Pop-Up Galleries and, of course, brunches at the Beachland.