My Collinwood; Installment No. 1 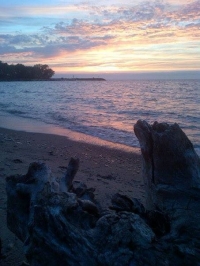 Hello fellow readers, my name is Allison and I’m your new neighbor. I’m not a native Clevelander nor a born-and-raised Midwesterner. And if it weren’t for Stephen Love (community activist, Euclid Beach Blast event planner, Board Member at NorthEast Shores, my boyfriend) your neighbor I would not be.

Even before taking up residency in July, I found myself on Waterloo or Euclid Beach multiple times in a week. As an artist, the neighborhood offers matchless opportunities. Same goes for sun worshiping, concert going and dining. Driving back to the old abode in Cleveland Heights from a gallery opening late last winter, I calculated how much dough I’d spent on gasoline, handed over to RITA and paid to the city’s recreation center.

Moving into North Collinwood was a no-brainer.

Why then, when I share my new address with friends and co-workers do they stare at me as if I have no brain at all? Without prompting I was told friends’ of friends’ accounts of muggings, polluted waterways, vacant homes.

(What corner of the world doesn’t have a blemish or two on its shiny, happy facade? Even in French Polynesia plastic trash washes up on the beach.)

I counter their claims with tales of Archie’s Bakery, Dorchester’s block club concerts, farm-to-table dinners, and my super awesome landlord. Oh, and I brag about FREE Zumba classes.

I’m not naïve; I don’t think the rainbow I saw over the marina last week signifies that I live in a world of sugar plum fairies. I’ve lived in Eastern Europe and China, my hometown is less than an hour from the country’s “most dangerous city,” and I’ve traveled the slums of Nairobi, Kenya. Needless to say, I own pepper spray.

I’d lived in the North Collinwood house for just one week when scrolling through my Facebook profile I discovered that I’d been tagged as the sun, sinking behind the crisp line of the Lake Erie horizon, as seen from my street’s private beach. I was tagged as the sunset eight times.

See, in the short time since the move, I’ve lured friends out from under the suburbs’ security blanket with promises of cold beer, a sand beach and of course, magnificent sunsets. It works. They reluctantly venture into part of Cleveland that for some remains a place only suited for late-night concerts or the place where the failed attack of Danny Green occurred, marked by a colorful but telling mural.

With hesitation, my friends turn off I-90. With baited breath I wait, watching  as palms sweat less and nervous chatter fades to excitement and disbelief.

“It’s so nice here!” one squeals. “You’re so lucky,” another gushes.

Someday this place will be flooded with people. They’ll call it the new Tremont.

I want to do my part to make that future happen someday sooner by sharing the road blocks as well as the small triumphs of luring more friends from suburbs like Lakewood and the Heights, into a city neighborhood that is just a few palm trees shy of paradise.

Alison Lukacsy is a new North Collinwood resident and artist loving her beach street, Waterloo Arts, Project Pop-Up Galleries, and brunches at the Beachland. Architect by day, serial upcycler, crafter, event planner by night, and the neighborhood's next cheerleader.

A new North Collinwood resident and artist loving her beach street, Waterloo Arts, Project Pop-Up Galleries, and brunches at the Beachland. Architect by day, serial upcycler, crafter, event planner by night, and the neighborhood's next cheerleader.

Read More on Getting To Know You