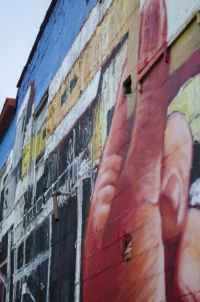 A blend of the urban landscape and fine art, that is what Baltimore based street artist Gaia displays in his new Waterloo mural. A young artist, who has already gained critical acclaim around the world, Gaia got his start making posters in New York and moved to wall murals as a way to do his art in a larger and more provocative way.

He also discusses trying to find a balance in his work, trying to be respectful of neighborhood residents without allowing his artistic vision to be manipulated.

In Collinwood, his aim is to create a mural that reinvigorates and has a cultural significance. Featuring an industrial landscape with fine art elements, the mural celebrates Cleveland’s rich artistic and commercial histories and considers how they intertwine. As Gaia explained, “It is a metaphor of a new urban frontier.”  The mural’s weaving of Cleveland strengths makes it a tribute to the city’s past while also proposing an optimistic future.