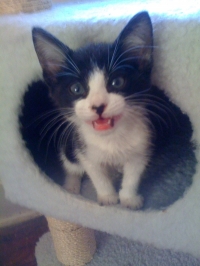 Donald was on his way to the Waterloo Arts Fest on a sweltering hot Summer afternoon. While walking over the busy E. 152nd Street bridge he felt a pair of eyes intently focused on him. It was a tiny kitten hanging on for dear life on the outside of the chain link fence with a shoestring tied around its neck. Someone had left it there to dangle over the railroad tracks some 100 feet below.

At the risk of his own safety, Donald quickly climbed up to where he could reach the kitten and save it from falling. As if this poor creature's plight wasn't bad enough, he discovered that it had also been doused with a kind of chemical that burned his skin upon touching it.

The whole scenario was so overwhelming it was hard for him to think straight. Fortunately however, he remembered that his mother-in-law, Sheila Harris, had connections with a local grassroots volunteer group that had helped her with homeless cats, called the Waterloo Alley Cat Project (WACP). He called her and she told him to bring the kitten over immediately.

Sheila bathed the kitten countless times to wash the noxious chemical off before it burned any more fur and skin off of its body. Her own skin was getting blistered while touching him, but the little guy was so happy just to be in her hands that he kept purring through the whole ordeal. After treating him with all the means available to her, Sheila contacted WACP for help to save his life.

'Baxter' was taken to Rainbow Veterinary Clinic where Dr. Linda Mitchell quickly stabilized him. He tested negative for feline AIDS & leukemia (FIV/FELV), so a course of other tests and treatments could commence for his massive infection and injuries.

Baxter was then sheltered and tended to around the clock by WACP volunteers for several days at their cat sanctuary. Once signs of significant recovery became apparent, he was returned to Sheila who has given him a forever home in her heart as well as her house.

Today, one could never tell that Baxter has ever had a bad day in his life. As Sheila puts it, "He looks like a wildcat! Since you took him to the vet, he is doing so much better. Last night he was so playful that he spent hours batting a peach pit around the kitchen and stalking a stuffed 3-foot cheetah. Baxter has lots of heart and courage. I may have to change his name to something with more bravado. I love this little guy so much! Thank you, thank you, thank you, God bless you, WACP!"

This is just one example of a tragic problem that urgently needs to be addressed on every level. Anti-cruelty laws in Ohio (HB 108 Nitro's Law) need to be put on the floor for voting and for that to happen, people need to call their Ohio State senators. When it was put before the Ohio House of Representatives, animal rights champion Kenny Yuko voted for it. Josh Mandel voted against it.

Any witnesses to acts of animal cruelty, including suspected acts, are strongly encouraged to call 911, the Police, or the Animal Protective League's Investigations Unit on 216-377-1630 immediately. Information leading to prosecutions protect the entire community. It also sends the message that cruelty will not be tolerated in a neighborhood that cares for its people and its animals.

If you would like to help defray the high cost of caring for animals such as Baxter, your generosity will be greatly appreciated. Tax deductible donations can be made to Waterloo Alley Cat Project and sent to Northeast Shores Development Corporation at 317 E. 156th St. Cleveland, OH 44110. Blue Arrow Records at 16001 Waterloo Road, Cleveland, OH 44110 is also able to accept donations via mail or in person. All support is extremely valuable at this time.

Save these dates: Benefit at Cebar's Tavern, evening, August 10th. Beachland Ballroom afternoon, August 11th as part of 'Dog Days of Summer'. The 3rd Annual Waterloo Classic Car Cruise-In at The SS&W Boardwalk, September 22, 3pm til dusk. Come down for some live music, raffle items and lots of fun at all 3 events.

Be sure to visit Waterloo Alley Cat Project on Facebook for all updates and some ridiculously cute photos of our cats!