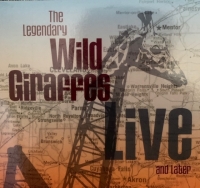 I'm combining these because they're essentially two versions of the same release– the first seven tracks and final track are the same on both, the CD just has an additional 8 studio tracks. We'll start with the live material. Oh my god! It's fantastic! They kick off with an absolutely smoking version of "Right Now," the title track from their only LP and it blows the studio version out of the water, which is a story that's repeated with pretty much every track here. I know people think the "Right Now" album is badly produced and sorta not that great– I fully understand that, though I still enjoy it– but they oughta check this out. The songs on the LP (or the live half of the CD, if that's how you're listening) are basically the definitive versions– particularly the classic originals like "Love Me," "I Don't Know About You," and again "Right Now." There's also "Under My Skin," another great tune that's never been released before (though there is a studio version which someone should put out as a single). This is some of the greatest power pop ever recorded. No exaggeration. Immensely catchy songs, very high energy, perfectly jangly and pretty where it needs to be– but never ever wimpy or any of the other more negative traits associated with power pop, because first and foremost the Wild Giraffes are a rock band. And the group absolutely destroys on here. Dave Ivan and Alan McGinty are a powerhouse rhythm section (Dave "Animal" Ivan gets a couple good screams in, too– and I always knew Alan was a good drummer, but man, he's on fire here). The twin guitar attack of Edgar Reynolds and Bill Elliott is in full force– it's really incredible the way they work together on here. And I've always thought, but this record certainly strengthened this opinion, that Chris King is the standard that all singers in this style should be held to. He's just at the top of the game. The whole thing makes you excited just listening to it. It's powerful. The final track of the LP is not actually another live track but an earlier studio track that's called "Tell Me You Love Me" on the LP and "Over And Over" on the CD, mysteriously. It's may be the weirdest track in their catalog. It's a six and a half minute groover that's kind of an okay song but is elevated by the presence of the brilliant Monte Carmont (or K.D. Carmont, as he's credited here) doing some bizarre teenage lust/Lou Reed-esque narration over the top of it. I can't quite make out everything he says, but what I can is pretty great ("Girls did respect me. I had no problems."). And then at one point, one of the Giraffes (Edgar, I'm pretty sure) starts doing his own spoken word thing too! It's kind of insane! Besides the Giraffes, who are absolutely underrated, there's another great Cleveland musician who more people should know– pick up that Monte Carmont & What 4 record if you can find it, it's great. Also included with the vinyl version is a nice booklet with lots of photos, newspaper clippings, and other cool stuff (I particularly liked looking at the Wild Giraffes fan club membership cards and seeing such notables as Jane Scott and David L. Atkins). Now that I've told you how great the LP is (and it really, really is and you should get a copy immediately), here's my problem: it's too short! It really leaves you wanting more. The whole thing feels like it's over in ten minutes. Yeah, all seven songs are incredible, but I need more! And I know there is more! Maybe (hopefully) they're saving some stuff for another future archival release. Fingers crossed. Now onto the studio tracks from the CD. Across the board, they're pretty good. They do not rip as much as the live stuff, but as far as the songs go there are some real winners here. "Good As Gold" is very '60s and very Beatle-y in particular, between the "Tomorrow Never Knows" drum beat and the "Ticket To Ride" quotation at the end. "Angel" is a little more new wave, but still cool. "I Wanna Be A Giraffe" and "99 Times" are both solid power pop rockers. I really like "Talk To Me," though it definitely sounds like an unfinished recording– Edgar and Bill feel not quite present enough, like they did everything but the final guitar overdubs. I'm almost certain I've heard live versions that have more going on. Still, good song and you gotta love when Chris King growls "talk to me" the one time. The weakest three are all right in a row, actually– "Another World" (which, honestly, is still pretty good, and it has some fuzz guitar in there), "A Girl Like You" (which must be earlier because, like "Over And Over," it features Mike Terrell on guitar instead of Bill Elliott), and "Give Me A Kiss," which is a straightforward rock 'n' roller but also a Christmas song. Even with those being the weakest links, they're certainly not so bad you'd skip them or anything. In either form, LP or CD, almost certainly my favorite archival release of the year, and again, I really really hope there's more releases planned because I know there's other great stuff that has yet to see the light of day. Still, for now, this will do you very well. 5/5

Are you a local-ish band? Do you have a record out? Email vaguelythreatening@gmail.com or send it directly to Buzz Kompier: PO Box 770203, Lakewood, OH 44107.