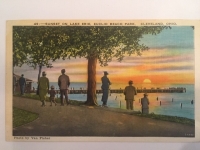 After having read about the completion of the rebuilding of Euclid Beach Park pier, in a free moment I finally made my way down to see it for myself. Though the official ribbon cutting of the 2.5 million dollar project is planned for the week of May 20th, after remaining landscaping is finished, it is currently open and accessible to visitors. The original pier, which was built to receive ferries shuttling passengers to the former amusement park, now has been rebuilt in a shortened version allowing for access onto the lake for sightseeing and fishing.

Access to the pier is accented by a series of three arches channeling visitors to its end. The metal work depicts various silhouette scenes of Euclid Beach Park in its glory days. They are the creation of regional artist Brinsley Tyrrell.

Tyrrell, 77, Kent State University art professor emeritus, had taught sculpture there from 1968 till 1996. Born in Godstone, county of Surrey, England in 1941, he would later attend the Camberwell School of Art & Crafts at the University of London. The pier arches are only the latest of his local public art commissions. He is also responsible for “59 Stories (Coventry Road)”, a series of wrought iron plant railing sculptures in Cleveland Heights. He has also done and number of ornamental gating and fencing installations including Slavic Villiage’s Mill Creek Park, University Circle’s Botanical Garden, and Ohio City’s Orchard School Park. Other works include RTA’s West 117th & Madison Stop of large enameled corridor panels and the sculpture “Waywood Walls” on the on the campus ground of Case Western Reserve University off Cornell Road.

The coalition of Cleveland Metroparks, local political and civic groups can be proud of what they’ve accomplished in the reviving of a local landmark and public access to our water front with a whimsical nod to Collinwood’s past.