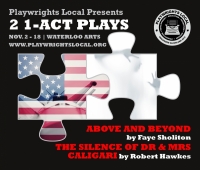 The twin-bill production runs November 2 through 18, 2018, with performances Friday & Saturday at 7:30 p.m. and Sunday at 2:30 p.m. There will be a special half-price preview on Thursday, November 1 at 7:30 p.m. All shows will be at the Creative Space at Waterloo Arts (397 E. 156th Street, Cleveland, OH 44110). Tickets are $18 for adults, $15 for seniors and groups, and $12 for students. Group packages can be arranged by contacting Tom Hayes at hayes@playwrightslocal.org or (216) 302-8856. For complete information, visit the company’s website athttp://playwrightslocal.org/.

Above and Beyond takes place in an American military bunker in October 1973. Just hours after the DEFCON level was changed from “elevated” to “heightened,” two Air Force officers report for duty at their underground post. Lieutenant Marc Garfinkle, whose usual concerns revolve around earning his CPA and starting a family, faces much bigger challenges on this day. He and his fellow officer, Major Darren Whitley, may be called upon to destroy a distant city, then live with what they’ve done.

Above and Beyond is the latest work by Cleveland-based playwright Faye Sholiton, whose plays have been presented in more than four dozen venues and have garnered more than twenty honors. A four-time winner of the Ohio Arts Council’s Individual Excellence Award, Ms. Sholiton is a charter member of Dobama Theatre’s Playwrights’ Gym and a former member of the Cleveland Play House Playwrights’ Unit, as well as the founding artistic director of Interplay Jewish Theatre. The production of Above and Beyond is directed by Craig Joseph, whose recent projects include Les Liaisons Dangereuses (Weathervane Playhouse), Doubt (Players Guild), and Trouble in Tahiti (Canton Symphony), and who serves as artistic director of Seat of the Pants Productions. The cast includes Nicholas Chokan and James Alexander Rankin. Stage management is by Megan Slabach.

The Silence of Dr and Mrs Caligari is a theatrical reimagining of the charlatan showman and his exhibit, “The Somnambulist,” from Robert Wiene’s classic film The Cabinet of Dr. Caligari (1920). This new work places the doctor and his son Cesare at their home, between tours, with the complication of an added mother figure. The saga of this expressionistic family reaches a turning point when the “sleeping” Cesare emerges from his resting coffin and attempts to speak. Magically, he brings with him snatches of Western music, which the doctor takes as attempt at communication...or even salvation.

The Silence of Dr and Mrs Caligari was written by Robert Hawkes, whose recent credits include The Casual Tree Ward (2018) and Give Me the Map (2016) and whose acting awards include recognitions in Scene’s “Best of Cleveland” for 2017 and 2015. As an performer, Mr. Hawkes has worked with Dobama Theatre, Ensemble Theatre, Beck Center, Ohio Shakespeare Festival, Mamaí Theatre, Playwrights Local, and many more. This debut production of The Silence of Dr and Mrs Caligari is directed by Susan Soltis and features Ray Caspio, Robert Hawkes, and Anne McEvoy. Stage management is by JC Cifranic.