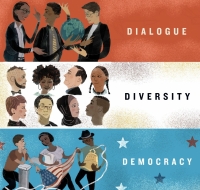 Honoring the right to free speech and inspiring Clevelanders to consider the role of free speech in our civic landscape, The City Club of Cleveland partnered with Cleveland Metropolitan School District to install a new public mural at New Tech Collinwood High School. This is one of three murals by local artists as part of its “Freedom of Speech Mural Project.”

“This project reflects the City Club’s steadfast commitment to stand on the side of free expression,” says Dan Moulthrop, CEO of the City Club. “Every week we invite audiences and speakers to participate in civil, civic dialogue because we believe having a place dedicated to the practice of free speech deepens our understanding of each other and strengthens our democracy. Each of these artists has interpreted our mission in their own voice and from their personal experience to create a visual representation of the challenge and privilege of our right to free speech.”

The theme was selected to celebrate the 75th anniversary of the Elmer Brown Freedom of Speech mural that hangs in The City Club auditorium, honoring his artistry and the history of that work while embracing today’s truth about free speech as interpreted by local artists.

The artist described the work as a story told in three parts. First is dialogue—the foundation of The City Club’s work. The burning earth from Brown’s original mural is restored and Elmer Brown takes center stage in this story. The second story is intended to reflect Cleveland’s great diversity and the importance of engaging people of all ages, races, and genders to bring their voices to the conversation in order to strengthen our democracy. The final story is more metaphorical. Democracy is the bedrock of our country, symbolized with a pillar, our flag, and a liberty bell, and I placed myself in the bottom as a participant in democracy. The woman in the center is holding documents representing the rules, regulations, and institutions of the past that are falling into obscurity to make way for a new, bright future.

“This is one of the last projects Christopher was working on, and his family wanted to make sure it was completed and installed in the community to reflect his commitment to use artwork to improve the world,” added Moulthrop. “They are particularly happy to know it will be part of a school campus knowing Christopher’s dedication to his students and teaching.”

The City Club working with LAND studio, chose to use heat applied vinyl instead of painting the mural, in order to open up the submission opportunity to photographers and illustrators, as well as traditional muralists. A volunteer community selection committee met to select the final artists from more than 30 submissions.

“When we received the work from our final artists, we were blown away not only by the powerful work of each individual mural, but also the diversity of perspective they represented when viewed as a collection,” said Moulthrop. “We were so inspired by the distinct interpretation of each artist, that we decided to identify partners in the community who would help us find a home for all three final murals. Thanks to the support of a number of generous donors, we were able to raise the dollars to produce not one, but three murals representing what Freedom of Speech means to our city today.”

New Tech Collinwood High School was selected as the location for the second mural because the artist, Christopher Darling, brought narrative and diversity to his work, matching up beautifully with the mission of Cleveland Metropolitan School District. The first mural, done by April Bleakney, was installed outside Bonfoey Gallery in Playhouse Square in September, and the third mural, by Donald Black Jr., is on view at the Rice Branch of the Cleveland Public Library.

“Cleveland has a great history of murals that have brought color and creativity to the city landscape, which we’ve seen reborn in recent years, thanks to the Creative Fusion program at Cleveland Foundation and the Front Triennial,” says Moulthrop. “These murals tell the stories of our neighbors and our neighborhoods and create new connections in our community. We hope that the City Club’s ‘Freedom of Speech Mural Project’ will bring our mission ‘to create conversations of consequence that help democracy thrive’ into the community and add to the breathtaking resurgence of mural art in Cleveland.”