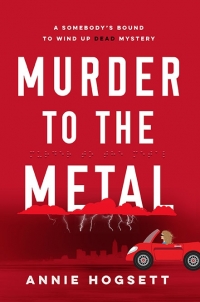 Murder to the Metal takes place in Cleveland

Cleveland author Annie Hogsett’s second mystery novel, Murder to the Metal, will be released on June 5 by Poisoned Pen Press,an independent mystery book publisher and one of the largest publishers of hardcover mysteries in the world.  The book will be available at Cleveland bookstores as well as online at Amazon, Barnes & Noble, and Poisoned Pen Press’s website.

Murder to the Metal is the sequel to Too Lucky to Live, the first in Hogsett’s ‘Somebody’s Bound to Wind Up Dead’ mystery series, which debuted last May to a host of positive reviews and accolades among the publishing community.

Murder to the Metal also takes place in Cleveland and picks up on protagonists’ Allie Harper­—intrepid part-time librarian—and Tom Bennington III—blind, PhD—who, thanks to Tom’s accidental $550 million MondoMegaJackpot lottery win, are now living in a rented lakeside mansion in Bratenahl with a skylit shower and astronomically high-thread-count sheets and have taken on the first case for their T&A Detective Agency. The duo enlists return characters to help them follow a lethal trail of escalating crimes ranging from scrapping to pushing opioids to multiple murders.

Cleveland readers will recognize street names, like Ridpath and Grovewood, Cleveland eateries, like Slyman’s and Beach Club Bistro, and landmarks, like the Waterloo Arts District, the ghostly former observatory on Taylor Road, the Memorial Nottingham Branch of the Cleveland Public Library, and of course the Marriott at Key Center.

Hogsett was born in West Virginia and attended West Virginia University where she received both her bachelor’s and master’s degrees in English literature. She and her husband, Bill, moved to Cleveland in 1972 and reside on the shores of Lake Erie, a constant source of inspiration. Prior to embarking on her writing career, Hogsett had a career as an advertising copywriter in which she honed her writing skills and her dream of becoming a published novelist.