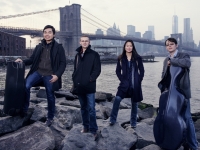 The seventh season of Music for Miles concerts opens on March 11, with Amphion’s String Quartet – who delighted us in 2012, when we were getting started. It’s a great pleasure to welcome them back. Michael Houff on violin is accompanied by Amber Dimoff (violin), Liesl Langmack (viola) and Derek Snyder (cello).

Amphion and Zethus, in Greek mythology, were the twin sons of Zeus by Antiope. When children, they were left to die on Mount Cithaeron but were found and brought up by a shepherd. Amphion became a great singer and musician, Zethus a hunter and herdsman. (In Euripides’ lost Antiope the two young men debate which has more advantages, the quiet or the active life; the passage is often mentioned in ancient literature.) After rejoining their mother, they built and fortified Thebes, huge blocks of stone forming themselves into walls at the sound of Amphion’s lyre. Amphion later married Niobe and killed himself after the loss of his wife and children.

The concert, as always, will be at 4 pm on Sunday afternoon (March 11), in the Waterloo Arts Center; the gallery will have the DayGloSho on display, and the Callalloo will have wine, refreshments and the possibility of a Jamaican Sunday dinner afterward.

The concerts continue to be small, informal and chatty – arrive late, leave early if you must, ask questions and enjoy the atmosphere. And they’re free.

For the rest of the year?

On April 8 we’ll host Cleveland’s new music group No Exit – as we did in 2011, with local resident Nicholas Underhill; they’ll open our ears to what young composers are doing in Cleveland and around the world. On May 13 percussionist Mell Csicsila and friends will expand our ears some more by making music with everything but the kitchen sink – bring your children!

The Fall season starts with the irrepressible Mary Beth Ions and the Amethyst String Quartet, on September 9. African-American soprano Pat Harris will take us down a different road on October 14. And for November 11, I have my heart set on a brass band – more later.