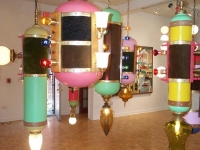 Bruno by Dana Depew, courtesy of the artist

I am always amazed by the seemingly endless inventiveness of artists. They seem to get inspiration from so many different things. Some find excitement in the natural environment, others in a fantastic world. The expressions are equally varied and exciting. In Cleveland and in my experience with SPACES, a non-profit art organization, many find rich inspiration for their artwork in the fading industrial landscape of Cleveland. Often the artists will arrive from foreign lands and other cities and are drawn immediately to the large warehouses and manufacturing centers, and of course the steel mills with their stacks spitting fire over the downtown skyline. When the artists arrive to work at SPACES as part of the residency, HGR Industrial Surplus often comes up as a resource for material and inspiration.

I have been in Cleveland since the early 90s and have helped many artists gather material for their work in lots of places within the industrial areas. I have gone with artists through the steel mills and collected taconite balls and slag, I have gone to old warehouses with photographers looking for unique kinds of space and light. And I have gone to HGR where I have spent hours with artists going up and down the aisles looking at the various machinery and parts that are there for the taking.

I first heard about HGR many years ago when a fellow artist Dana Depew suggested that I go there for some pulleys needed for a project. He said that there were bins filled with everything that I could want. He was not wrong. Dana makes all kinds of intricate constructions from found parts and industrial debris; so, he would know. He works as a curator for the Slavic Village art initiative "Rooms To Let" that draws attention to the abandoned homes in that neighborhood by allowing artists to take over a house and fill it with installations. He also has owned his own gallery and shown many young up-and-coming artists in this region. Dana was a long-time board member of SPACES and helped a whole lot of artists make connections in Cleveland that helped them make their work.

When Jake Beckman came to Cleveland for a residency at SPACES, he had an Idea to illustrate the power and beauty of labor. We set him up in a warehouse space not far from The Powerhouse on the west side of downtown where Old School Salvage was located. He immediately set out to find as much material as he could that would allow him to explore the rich interaction between production and labor. He went to HGR and collected rollers and pulleys and some belting, servos. You name it; he gathered it up. For Jake, it was one-stop shopping. Although Jake lives and works in Philly, he returns to Cleveland often and goes to HGR each time to see what he can take back with him. Jake's entire practice has revolved around the industrial landscape.

In the mid-90s, Laila Voss collected tons of material for a project as part of Urban Evidence, an expansive show that was on display at the Cleveland Museum of Art, The Museum of Contemporary Art, and SPACES. Voss, who now is the executive director of Art House Inc. in the near west side of Cleveland and a current board member of SPACES, has been making large-scale multi-media installations throughout her career -- most recently showing at ARTNeo, a museum of Northeast Ohio. At one point, needing some material that would work for a projection screen and to build a replica of a water tower, she found what she needed at HGR, along with a slow-moving motor that would operate a part of the installation. Return trips to HGR are not uncommon for Laila.

Very often, the artists that I work with find that the people of Cleveland are helpful and friendly and willing to give their time and energy to help make a project happen. I love that I can send an artist to HGR and have them come back with big smiles having been inspired by the variety of machine and parts that are available and the openness of the staff to help them locate every odd bit of thing that an artist is looking for. Most often, the artist will return to pick up just one more thing that will help him or her outfit his or her studio or for some crazy-looking thing that will be just perfect for a project.