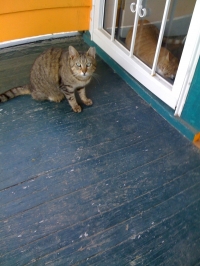 Monkey was just one of some 20+ casualties resulting from the dog attacks. WACP is hoping to get enough financial support to build a secure enclosure for homeless/ community cats.

During the month of October, over 17 cats were killed and 2 seriously maimed by a pack of roaming dogs in the North Collinwood/Euclid Beach neighborhood. More cats are missing and presumed dead.

Animal Control trapped 2 roaming dogs within the target area and found the owner who had a total of 5 adult dogs and 9 puppies. The owner relinquished ownership of the dogs to Animal Control and now faces any legal charges that can be laid against him.

Tax deductible donations toward building a secure enclosure and safe winter shelters for a colony of community cats cared for by the Waterloo Alley Cat Project will most gratefully be accepted either at the vigil or by mail to PO Box 19246 Cleveland OH 44119. For more information please visit https://www.facebook.com/pages/Waterloo-Alley-Cat-Project/104107389662808