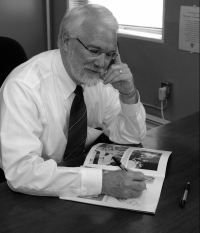 In the late 1960s, young Richard Osborne’s numerous extracurricular activities as a student at St. Joseph High School included responsibility for writing the weekly “Viking Views” column for the local community newspapers, the Euclid News-Journal and the Collinwood Scoop.

As things turned out, that task proved to be a stepping stone to a distinguished career in journalism and publishing. Now, Osborne is retracing his steps--but in the opposite direction.

A member of the 1969 St. Joe graduating class, he is retiring from the publishing business, where he most recently served as editor and publisher of the award-winning Ohio Magazine, to become the new President at Villa Angela-St. Joseph High. (The president oversees the financial and operational side of the school, while the principal is primarily concerned with the academic environment.)

Osborne, 60, officially started in his new position on July 25, replacing Brian Menard who held the post for the past two years.

“I’ve had a lot of wonderful jobs over the years,” Osborne reflects. “But this one at VASJ is special. I'm really excited about it. Leaving the publishing business is a big step for me, but I have no intention of ever taking another job.".

An area native who grew up in Euclid and North Collinwood (he attended both Holy Cross and St. Jerome grade schools), Osborne has been a steadfast supporter of St. Joseph and VASJ for many years and served as chairman of the school’s Board of Advisors from 2009 to 2011.

One of the items high on the list of things he’d like to do early in his capacity as the school’s president is to write at least one more “Viking Views” column for the local community newspapers. His message, no doubt, will emphasize his confidence in the East 185th St. school’s prospects for the future.

“I object to the feeling among some graduates that it just isn’t the same anymore with the merged school. That simply isn’t true,” he stressed in an exchange with the Observer.  “Sure, the personality of the school may be different. We may not have 2,200 boys roaming the halls and we are not an all-girls school in a castle on the lake, but the character of VASJ is precisely the same as it always was at VA and SJ.

“I wish more alums would stop by for a visit and spend a little time walking the halls, talking to students and teachers, and seeing the kids in action in class. They are amazing. And the spirit that made so many of us so loyal for so long is alive and well and flourishing.”

Osborne says that one of his major goals as president will be to “introduce or re-introduce grads and the wider community to the school. I want to raise our public profile so everyone knows about the great things happening here. Believe me, I know there are naysayers and doomsayers out there, but they are just plain wrong. We’re on a strong and steady course into the future.”

During a journalism career that included executive positions at Cleveland Magazine, The (Lorain) Journal, and Industry Week magazine, Osborne gained wide respect in the publishing industry. A two-term past president of the Press Club of Cleveland, he was inducted into the Cleveland Journalism Hall of Fame in 2007.

One St. Joe grad who was delighted to hear that Osborne had been chosen for the VASJ post is Tim Ryan (’61), a professional photographer who offered to provide the photos that accompany this article.

“The Vikings are lucky,” Ryan said. “There is no candidate more worthy. Rich is a home-grown fan of the school.” Ryan, a member of the VASJ Hall of Fame, has served with Osborne on the Hall of Fame selections committee.

While a student at St. Joe’s, Osborne served as editor of the school’s literary magazine, as an editor for the school newspaper, a class officer, and as vice president of the Student Council. After graduating in 1969, he earned a bachelor’s degree in fine arts at the University of Cincinnati in 1973.

Since 2001, Osborne has been a publisher with Great Lakes Publishing Co. and editor of Ohio Magazine, which he led to numerous awards, including recognition by the Society of Professional Journalists as the state’s best monthly publication. Prior to that, his career included service as the founding editor ofInside Business magazine and as acting editor of Cleveland Magazine.

From 1996 to 2002, Osborne was a project director, speaker, and editor with Industry Week, the Cleveland-based national magazine. There, he oversaw various special projects, including development of the IW 1000, a ranking of the world’s largest publicly held manufacturing companies, and the “World’s Best-Managed Companies,” a global honor roll of managerial excellence.

As president of The Osborne Group since 1994, he has managed publishing projects for regional and national clients, including The Plain Dealer, Business Week, the Pittsburgh Post-Gazette, and Case Western Reserve University.  He is the author of A Community of Faith (1998), a commemorative publication for the Diocese of Cleveland, and also Cleveland-Cliffs (1997), a history of the international iron-ore company.

Well-known for his knack for providing insightful analysis, Osborne has been in demand as a guest panelist on local radio and television programs discussing topics of regional and statewide interest.

Currently a lector at St. Mary of the Immaculate Conception parish in Avon, Ohio, Osborne and his wife Della have been married for 41 years. They have four children and six grandchildren.

And, wouldn’t you know it: The couple first met, formally, at a dance in the St. Joseph High gymnasium. Which probably goes a long way in explaining why Rich Osborne has held such fond memories of his alma mater for so many years.