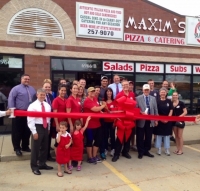 Grand opening of Heisley location in 2014

For over now 70 years Maxim's Pizza and Catering has been serving Cleveland's eastside neighborhoods.

First established in 1949 by patriarch Manny Berardinelli, Collinwood '39, at the southwest corner of

East 185th and Cornwall Road, their store would later move out to Mentor on Lake Shore Boulevard in

his son Tom. That same year daughter Loretta, son Gene, and daughter-in-law Kathy would open and

continue at their current location in the plaza off Heisley Road north of Mentor Avenue.

There you'll find a large selection for lunch and dinner options, as well as the normal Pizza & sub fare.