Hail To The Chief! 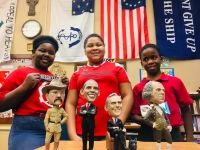 Since August, St. John-Nottingham’s 5th Grade Social Studies class has been learning about two US Presidents a week, from Washington to Trump. Students have read small biographies, learned a few interesting facts, and worked hard to memorize a list of the president’s names in chronological order. All in preparation for memory test on all 45 Commanders-in-Chief.  Mr. Lawlor, St. John-Nottingham’s History and Humanities Instructor, decided to make the test a bit more interesting and offered that any student who was able to achieve a perfect score would be rewarded with a candy bar.

Never far from her small stack of well-worn flash cards, Aniya began studying back in September. Brooklynn, pictured in the middle, appears without a candy bar, “I gave up candy for Lent.” she reminded Mr. Lawlor. Brooklynn was quite pleased with the peanut butter filled pretzels she received in lieu of sweets.

“Once you get presidents one through thirty, it becomes easy.” Stated the ever modest Jay’veon Levitt. Jay’veon, not only listed all 45 presidents in perfect order but, was also able to answer a series of bonus questions including, “Name all Eight Presidents from Ohio.” and, “Who was the first president to live in the White House?” – No, it isn’t George Washington. How about it, do you know? Are you smarter than a 5th Grader?