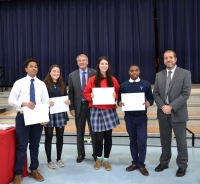 More than 200 students were awarded over $350,000 in scholarship money during Villa Angela-St. Joseph High School’s Scholarship Day on Friday, Jan. 31. Each of the scholarships was created to recognize the accomplishments of current VASJ students.

Alumni Health Care Careers Scholarship
Alumni of the school who are involved in healthcare-related careers founded the Alumni Health Care Careers Scholarship. Dr. Holzheimer presented $750 scholarships to students who are interested in a career in the healthcare field, have above average skills in science, maintain a good conduct record and are actively involved in the school.  The recipients of the $750 scholarships are:

Thomas J. Brazaitis Scholarship
The Thomas J. Brazaitis Scholarship is awarded to juniors with an interest in journalism, communication or English. The students maintain a good conduct record, are above average students and represent the true values of VASJ. This award is named after the late Tom Brazaitis, an author, Plain Dealer Washington Bureau columnist and VASJ Hall of Famer. The recipients of a $500 scholarship are:

Clark Blaine Clark Award
The Clark Blaine Clark award was established as a memorial scholarship for three members of the St. Joseph Class of 1990: Steven Clark, Frederick Blaine and Thomas Clark. The award was established to recognize a football player who shows spirit, camaraderie and commitment to the Viking community. Steve, Fred and Tom were members of the State Division II Championship football team. Tom was a student council president and one of three seniors selected to speak at graduation. Steve also wrestled at 189 pounds on the State Division I Championship wrestling team.  All three were to attend college on football scholarships. The recipient of this $500 award is:

Thomas J. Gentile Memorial Scholarship
The Thomas J. Gentile Memorial Scholarship has been created by the Gentile Family in memory of Thomas J. Gentile, a St. Joseph High School graduate of the Class of 1971. Tom was a successful businessman and long-time baseball fan and coach. Recipients are students who participate in baseball or fast pitch, maintain a GPA of at least 3.0, have a good conduct record, and are interested in a career in business or becoming an entrepreneur. The students who received a $1,000 scholarship are:

Robert Gliha Memorial Award
The Robert Gliha Memorial Award has been designated by the Gliha family in memory of Robert Gliha, a St. Joseph High School graduate of the class of 1970. Robert was the deputy director of economic development for the City of Euclid, where he dedicated a 37-year career to the development of the city and its local businesses. The recipient is a student who excels academically in the area of science, technology, engineering and math, has demonstrated leadership and is actively involved in service to VASJ as well as the community. Selected to receive a $1,000 scholarship is:

Lieb Family Scholarships
The Lieb Family Scholarship has been established by the Lieb brothers to recognize students who have completed their sophomore year, maintain a minimum of a 3.0 GPA, demonstrate Christian values, and are involved in two or more extracurricular or club activities. The recipients of $1,000 scholarships are:

Gloria “Mrs. M” Melaragno Scholarship
The Gloria “Mrs. M” Melaragno Scholarship is named in honor of Mrs. Melaragno who was affectionately known as “Mrs. M” by legions of St. Joseph High School students beginning in the 1960s. The scholarship awards students who are academically and spiritually solid and display the traits Mrs. M exemplified: selflessness, humor, kindness, hospitality, friendship and sensitivity to others. The recipients of $750 scholarships are:

Fred & Diana Prince Science Scholarship
The Fred & Diana Prince Science Scholarship is awarded to a junior who demonstrates excellence in science and plans to major in a science or technical field in college. The recipient also demonstrates leadership abilities in scientific activities at VASJ, has a social consciousness regarding the use of science, hopes to have a career in a science field and is a person of strong moral character. The recipients receiving $1,000 awards each are:

Joseph A. Radican Scholarship
The Joseph A. Radican Scholarship is named for long-time history and social studies teacher, speech and debate moderator, and former principal Joseph Radican, a member of the St. Joseph Class of 1956 and an inductee into the VASJ Hall of Fame. Mr. Radican, who retired in 2004, passed away in May 2011. The scholarship in his name honors an exemplary social studies student who is actively involved in school life. The recipient of a $500 award is:

Timothy W. Robertson Memorial Scholarship
The Timothy W. Robertson Memorial Scholarship recognizes students who are outstanding academic performers and models of school spirit.  The basketball court here at VASJ is named for Mr. Robertson, not just because of his devotion to the sport as a long-time statistician, photographer and most enthusiastic fan of the basketball team but for his steadfast loyalty to all things Viking. The highly respected math teacher and member of the St. Joseph Class of 1962 was a friend to all at VASJ. The recipients of a $1,000 award are:

Scheidel Scholarship
The Scheidel Scholarship was established to assist students who have high aspirations, strong academic performance and financial need. A cumulative minimum GPA of 3.25 is required. The recipients of $2,000 scholarships are:

Evelyn A. Svete Memorial Scholarship
The Evelyn A. Svete Memorial Scholarship was established by Sandra Turner, a Villa Angela Class of 1966 alumna, and her husband, Jeff, to honor Mrs. Turner’s late aunt, Evie Svete, a 1941 graduate of Villa Angela Academy. A successful businessperson, Evie Svete supported those who worked hard and demonstrated the traits of kindness, generosity, determination and integrity. The recipients of $1,000 scholarship are:

Nicholas Valentino Memorial Scholarship
The Nicholas Valentino Memorial Scholarship was established in memory of the 1964 graduate of St. Joseph High School by long-time friend Mark Haskell. For 26 years, Mr. Valentino was an accountant and a member of the Ohio Bar Association as well as the president of Advisory Services Inc. in Cleveland. Nominated by VASJ faculty and chosen by Mr. Valentino’s family, recipients are students who maintain a minimum G.P.A of 3.0, are in good standing with the school, display a strong work ethic and moral character. The recipients of $1,000 awards are:

Joseph P. Veasey Scholarship
Inaugurated in 2008 in memory of Joseph Veasey, a 2003 VASJ graduate who passed away after battling leukemia for 16 months, the Joseph P. Veasey Scholarship is designated to a junior or senior who excels in mathematics and displays strong academic curiosity. The recipients show interest in art, architecture or engineering and model Marianist family spirit by cultivating meaningful interpersonal relationships and developing a strong sense of community among their peers. The recipients of $1,000 awards each are:

Kay & Vince White-Petteruti Family Scholarship
The Kay & Vince White-Petteruti Family Scholarships are given to students who display kindness toward other students and demonstrate a true understanding of what it means to be a member of the Viking family. Students must also appreciate the benefits of a strong Catholic education and acknowledge the sacrifices their family is making to send them to VASJ. Receiving scholarships of $1,500 each are:

St. Joseph Class of 1969 Scholarship
The St. Joseph Class of 1969 Scholarship was established by the Class of ’69 on the occasion of its 50th reunion celebration. This scholarship is given in gratitude for the blessings of the Marianist culture and education these alumni experienced in the Viking Village both inside and outside the classroom. Proudly called “The Class with Heart,” the Class of ’69 awards this scholarship to VASJ students who embody the Viking traditions of school spirit, hard work, friendship and concern for others. This year's recipients of $1,500 awards are:

Donald D. Lynch Family Foundation Scholarship
The Donald D. Lynch Family Foundation has awarded Villa Angela-St. Joseph High School a $10,000 renewable grant for the purpose of providing scholarships for students who are goal-oriented, focused on education, work to their potential and have demonstrated behavior that’s consistent with the school’s code of conduct. Most importantly, the student must be actively living his/her Catholic faith by following the example of Jesus and living the Gospel of the Lord in all that he/she does.

The following three scholarships were awarded:

The recipient of The Donna Lynch Memorial Scholarship in the amount of $5,000 is Micah Dunn.

The recipient of The John & Margaret Lynch Family Memorial Scholarship in the amount of $2,500 is Charles Mullin.

The recipient of The Fr. David McBriar, OFM Scholarship, in the amount of $2,500 is Aneea Holman.

Howley Family Scholarship
The following students were selected for the Howley Family Scholarship as incoming freshmen. These students demonstrated high academic achievement in grade school and placed in the top third of the VASJ Placement Test. These students have maintained at least a 3.0 GPA while at VASJ, participate significantly in at least one extracurricular activity, maintain good standing with the school, and submit semi-annually an outline of their progress and academic accomplishments to the Howley Family Foundation. Combined, they’ve been awarded $121,600.

Entrance Exam Scholarship
The following students were awarded a scholarship based on their Entrance Exam Scores. Each of these students scored in the top 10% of his/her given year’s entrance exam and has maintained certain levels of honors to renew his/her monetary award. Their combined awards total over $123,750.