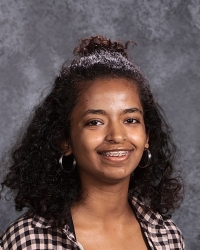 College Match Scholarship recipients are granted early admission to one of QuestBridge’s college partners with a full, four-year scholarship that covers tuition and fees, room and board, books and supplies, and travel expenses.

Ewunetie said she learned about the scholarship opportunity through a community-based organization that she’s involved with called Minds Matter Cleveland.

As part of the application process, students must complete an online application form and essays and submit two letters of recommendation from teachers, a school report from a high school counselor, a high school transcript and standardized test scores. Students can rank up to 12 colleges that they would like to be “matched” with. In addition to Princeton, Ewunetie said she included Stanford University and Yale University on her list.

“It felt like a weight off my shoulders and that I wouldn’t have to stress too much about college decisions anymore,” she said.

This year, 1,127 finalists were selected as College Match Scholarship recipients to 40 QuestBridge college partners, with 51 students being matched to Princeton.

Princeton is a non-binding school, which means students admitted through the match aren’t required to commit to attending the institution. However, Ewunetie said Princeton is her top choice at the moment. She’s interested in majoring in a science.

Ewunetie said she would definitely recommend the QuestBridge program to other VASJ students.

“It’s a similar type of application to most others in terms of supplements, transcripts and all of that, but the essays are different. The really nice part is that you find out decisions a lot earlier than with a normal application,” she said.

She added that VASJ has played a major role in helping her to determine which paths she wants to pursue after graduation.

“My time at VASJ has given me the opportunity to really figure out what I want in my future,” Ewunetie said. “I’ve been able to step outside of my comfort zone because my friends have encouraged me to try new things while I’ve been here. Because of that, I wasn’t really stressed about senior year because I figured I had done most things I really wanted to do in high school. All of my teachers and classes have really made a difference in how my high school path has gone, especially in what clubs I’ve ended up joining because of them.”