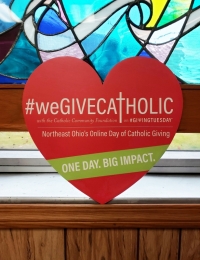 Thanks to the generosity of our donors, Villa Angela-St. Joseph High School exceeded its goal of raising $10,000 during #WeGiveCatholic on Tuesday, Dec. 3.

A total of 89 donors gave more than $12,000 on Giving Tuesday. The money raised will go toward renovating the VASJ Martyrs Chapel, a quiet, reflective space on campus for students, faculty and staff. The chapel was built in the early 1970s to hold morning Mass. Originally named after the four churchwomen who died in El Salvador, including Ursuline Sr. Dorothy Kazel, the chapel has since come to recognize others in the Marianist and Ursuline traditions who have died as witnesses to their faith. Renovations will include updating the look and feel of the chapel and turning it into a more welcoming, prayerful space.

“We are all thankful for the generosity and support shown to our students during #WeGiveCatholic,” said Bill Cervenik ’72, VASJ president. “Thanks to everyone’s generosity, our students will soon have a chapel where they can engage in personal prayer and reflect on their faith.”

#WeGiveCatholic is an annual one-day giving event that provides Catholic schools, parishes, charities, special ministries and nonprofits affiliated with the Diocese of Cleveland the opportunity to connect with current donors and establish relationships with new ones.

“It is heartwarming to see the support the Viking community has shown to our students,” Cervenik added. “We have exceeded our goal and are anxious to begin the long-awaited renovations to the Martyrs Chapel. Thanks to all and enjoy a blessed Christmas season.”

Thank you for your outpouring of support!