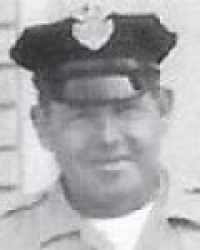 Officer Philip Maher was much beloved in the neighborhood.  He dedicated his life to the service of others and the memorial stone honoring him has been relocated to the grounds of St. Jerome School.  Officer Mahr crossed hundreds of St. Jerome students during his career even inspiring a few of them to follow in his footsteps and go into law enforcement.

Officer Philip Maher was a role model and friend to Collinwood residents, serving as a police patrolman and as a crossing guard for the school children of St. Jerome and Memorial schools.  He died while on duty after assisting the victim of a motorcycle accident.  The Corner of East 152nd and Lake Shore Blvd. is known as Maher Square in his honor and a stone monument was placed at the corner.

The monument has been struck by cars several times over the years and has finally been moved to a safer location, the front yard of St. Jerome School where so many of the children he looked out for each day went to school.  A rededication ceremony was held Friday, September 27th with members of the Maher family and the current students of St. Jerome in attendance.