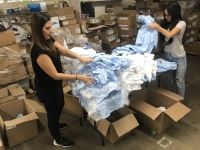 Representatives of the French Toast school-wear company package clothing for distribution at Memorial and four other CMSD schools.

Students in kindergarten through third grade at Memorial School will receive free uniforms and other clothing as part of a pilot program designed to improve attendance and achievement.

The nonprofit Shoes and Clothes for Kids and the French Toast school-apparel company will provide the items for three years. Teachers at Memorial and the four other CMSD schools in the pilot program will get free school supplies for their students.

The lack of clean or appropriate clothing can cause some children to miss school. Data compiled for CMSD’s ongoing “Get 2 School, You Can Make It!” attendance campaign shows that distribution of uniforms through the Cleveland Browns Foundation and Shoes and Clothes for Kids has helped raise attendance.

The pilot is based on the premise that stronger attendance will also result in higher third-grade reading scores. Students in Ohio must meet the state’s Third Grade Reading Guarantee to earn promotion to fourth grade.

Memorial Principal Maria Dinkins said many parents do not have washers and dryers at home and struggle to keep their children’s school clothes clean. Memorial does not turn away children who are out of uniform, but Dinkins said they may fear feeling that they are different from other kids.

“This is huge,” said Dinkins, who wept when she learned the school had an opportunity to participate in the pilot. “We buy uniforms for families almost every week.”

Theresa Pettway, mother of three Memorial students in the pilot program, said receiving the uniforms would free money for expenses such as groceries and utilities.

“It will help me a lot,” she said. “Some of us struggle with buying uniforms. We just don’t have the money.”

Matt Buesing, French Toast’s vice president for marketing, and four other company representatives were in Cleveland on Aug. 26 to package clothing for distribution at the schools. Nearly 900 students will each receive two polo shirts, two pairs of uniform pants, one casual top, one pair of casual pants, three pairs of underwear, three pairs of socks and a voucher for shoes.

“We’re a company that believes in helping kids succeed,” Buesing said. “I would challenge other companies to do what we did.”

Memorial was to distribute the clothing in early September. Dinkins said parents would be invited to the distribution.

The Eaton Corp., Dominion Energy Foundation and Char and Chuck Fowler Family Foundation are supporting the initiative. If the pilot is successful, Shoes and Clothes for Kids will explore ways to expand it, Executive Director Terry Uhl said.

Other schools in the pilot program include Whitney M. Young, Marion-Sterling, Almira and Alfred A. Benesch.

Thomas Ott is director of the CMSD News Bureau