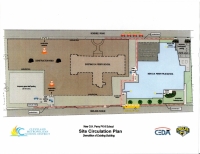 Our January meeting featured Patti Choby, from the Cobalt Group, who has been coordinating the planning and building of our new Oliver Hazard Perry School.

Best news is, the students at O H Perry move to their new school on January 24th. Because of the needed timeline to begin demolition of the old building, this will be a "soft" opening, with a full Grand Opening, and formal dedication, happening come spring (after the old building is down, hopefully.) And, the build project is done ahead of schedule!

1) Navigating around the school: buses will be using Harland Ave to access the school, while student drop off will be on Scheneley Rd. This plan is to keep traffic off the streets. (The traffic plan is included here.)

2) Certain architectural details of the old school are earmarked to be salvaged, and will be incorporated in the new school. Meanwhile, the pre-demolition abatement will begin, as soon as the new school is open.

3) There will be a temporary banner with the school name, for just a while. The Board of Education has to formally pass a resolution to open the school, at which time the permanent name sign goes up. The name, of course, will stay the same, as this community wanted. (It was also noted that CMSD does not change school names, when new schools are built; this is CMSD's regular policy with new school buildings.)

4) CMSD will be launching a Long Term Planning initiative, to get community input into CMSD's future. (The E 185th Neighborhood Association has offered to be one of these meetings. Stay tuned for future details!)

The meeting continued with our local Fifth District Community Engagement Officers (CEOs) Sabrina Walker and Aarius Waters updating members on recent crime in our neighborhood, and taking questions to follow up with.

Councilman Polensek then had news about several upcoming projects. First was that the redevelopment of Longfellow School into senior housing is on track. Then an update on the upcoming sewer and road project down E 185th, from Pawnee to Marcella. This $14 million project will be done entirely by boring underground, to keep traffic moving, then the street will be redone from curb to curb.

As always, we invite you to check out your local Neighborhood Association - the meetings are always listed in the Community Meetings calendar here in the Collinwood Observer.This is your regular chance, to talk to both the Councilman, and our local Police District - and it's a great way to be active in this community of ours. Look forward to seeing you! (And bring a neighbor!)

Moved to Collinwood in 2012 - and loving it! - but have been active in the neighborhood for many years before that.

Always interested in promoting Collinwood! Euclid Beach Park, history in general (especially as part of the Collinwood Nottingham Historical Society.) A regular contributor to the Collinwood Observer, as well as very much involved in things in the neighborhood. Currently Chair of the E 185th Neighborhood Association.