In Search of a Namesake: Charles Collins & the Ashtabula River Railway Disaster 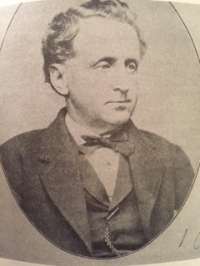 Though I’ve known for a while that Collinwood was named after Charles Collins, chief engineer of the Lakeshore & Michigan Southern Railway Company, now CSX, which bisects the neighborhood and whose railyard was an integral part. I even found some early maps that had it listed as Collinsville at one time. What I hadn’t known were the details regarding his tragic end.

Charles Collins was born October 31, 1821, in Brunswick, New York, northeast of Albany in the Hudson River Valley. He attended the nearby Rensselaer Polytechnic Institute in Troy, which is the oldest private engineering and technical university in the United States. After working with the Boston and Albany Railroad, he came to Cleveland in 1849 with the locating and construction of the Cleveland, Columbus, and Cincinnati Railroad (CC&C) line. Shortly afterwards he became superintendent of the Cleveland, Painesville, and Ashtabula Railroad (CP&A). It was these later two associations he would team up with Amasa Stone.

Amasa Stone had by at this point been a well-established rail bridge builder from New England using the Howe-Truss bridge design developed and patented by his brother-in-law William Howe. In 1850 Stone was appointed construction superintendent of the CC&C and, soon after moving to Cleveland, that of the CP&A as well. A couple years later he would be named director of both lines. In 1867 he joined the board of the New York Central Railroad, invited by then-president Cornelius Vanderbilt , who realized his need of connecting lines to the expanding midwest. The CP&A would change its name in 1869 to the Lakeshore Railway and, with a merger the following year become the Lakeshore & Michigan Southern Railway. Vanderbilt would soon join its board and eventually gain a controlling interest.

It was while serving as president of the CP&A, that Amasa Stone decided to replace the wooden elements of his Howe Truss design with iron for a 165-foot center span to be built over the Ashtabula River near Ashtabula in 1865. The iron components would be manufactured by his brother Andros Stone’s Cleveland Rolling Mill Company. When one of the CP&A’s bridge engineer’s, Joseph Tomlinson, reported to Amasa Stone that the iron structure wouldn’t handle the stress, he was fired and replaced.

On December 29, 1876, a westbound train carrying 159 passengers and crew left from Eire, Pennsylvania, crossing over the Ashtabula River at 7:28 pm in a blizzard. Just as the first locomotive of the two-engine, 11-railcar train reached over onto the far stone abutment, the iron center span gave way. The second engine and railcars plunged 76 feet onto the frozen riverbed below. The piled wreckage of wooden railcars were then ignited by the damaged kerosene heating stoves and became an inferno. Ninety-two would be killed and many burned beyond recognition. Though early rail travel was prone to accidents, this was by far the worst loss of life to date and would remain so for the next forty-two years.

When news reached Cleveland, Charles Collins left with a group to see what aid they could provide. It was reported that upon viewing the total devastation, Collins openly wept. He offered his resignation to the board of directors, but it was rejected. A board of inquiry was held to find the cause of the failure. On January 17, 1877, he testified that the design and construction were under control of then-president Amasa Stone. Even so that evening Collins returned to his home on the corner of West 3rd Street and St. Clair Avenue and shot himself.

Collins was a well-known and respected figure whom most held not responsible for the tragedy. The same could not be said of Amasa Stone, who, though not charged in the inquiry, would also commit suicide seven years later in his Euclid Avenue home after suffering from ulcers and troubled sleep. Collins would join many of the victims whose mass grave on the hill top of Chestnut Grove Cemetery in Ashtabula. The victims’ memorial obelisk is on the same car path as Collins’ stone mausoleum. While visiting, I thought to pace off the distance between the two memorials, roughly 165 feet. The length of the iron center span that collapsed. Upon leaving I drove down the steep hill with the car windows down and was suddenly caught off guard by the roar of a passing train only a couple yards away on the other side of the hill hidden from view by trees and brush. I hadn’t realized I was so close to his rail line. It is a fitting resting spot for a man who played such a key role in bringing rail service to Ohio.