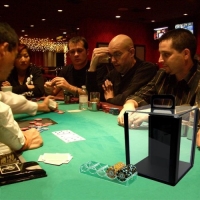 Mitch Opalich, president of Indelco Custom Products, Inc., is the third generation of Opaliches to steer the business that has been in existence since 1965. The company originally was founded by Opalich’s father, George, and grandfather, Stephen, both engineers, as Cleveland Plastic Fabricators & Suppliers, Inc., when they were asked by a national manufacturing customer of their metalworking company to fabricate and machine plastics.

Since the family lived in Collinwood and Richmond Heights, Opalich says, “It made sense to locate the business in Euclid due to its proximity to a high concentration of manufacturing and OEM companies,” and it has remained here even though the Opaliches sold the business to their employees in the early 1970s. In 1994, Mitch Opalich bought the business back after finishing graduate school and working in the financial industry. He sold the company in 2008 to a Minneapolis-based plastics distributor, and the name changed to Indelco in 2014. Though he no longer owns the company, he remains president, and the company remains family owned by the Dore brothers. Opalich sold the business to leverage the buying power, infrastructure and capital of the third-largest player in the industry. He met the owners through his membership in the International Association of Plastics Distribution. Indelco Cleveland currently has more than 250 customers, 50 percent of which are in Northeast Ohio.

Opalich says, “We’re an industrial plastic distributor and fabricator specializing in fluid process control.” What does that mean? Well, some of the cool items that they have fabricated include:

Indelco works with an original-equipment manufacturer that requisitions the plastic material or part, many of which are Cleveland-based, and is responsible for machining, assembling, welding and bending the items they fabricate.

Another interesting project is one that the company did for Eveready Battery Company’s Westlake, Ohio, research-and-development facility. Indelco helped Eveready convert its stainless-steel anode mixing system to plastic and standardize it throughout all of their facilities. The mixture was improved by using polyethylene tanks that did not interact with or contaminate the mix, making it cleaner and more uniform. Indelco also teamed with a process control manufacturer to fabricate double-walled tanks to hold hydrochloric acid for cleaning aerospace engine parts for Rolls Royce that had to meet seismic specifications due to the customer’s location in California. Interestingly enough, you can hold acids in plastic, and some of them are impervious to acids that will eat through stainless steel.

Plastic is machined and welded in a process similar to metal. Indelco hires skilled metal-industry welders and machinists then trains them on plastic techniques. Because the industry is young in the United States, since the 1960s, few trade schools teach plastic techniques, and most machinists are self-taught. The company has 20 employees in Euclid and 200 more at its corporate office and 14 other facilities.

Opalich’s connection to HGR predates the existence of HGR. He went to Mayfield High School with HGR’s founder, Paul Betori, and they remain friends.  Opalich says he buys and repairs tanks from HGR when a customer specifies the need, and he has bought shop equipment for his facility from HGR.