Lakeshore can be different, and thats a good thing. 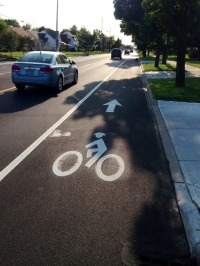 Cycling as a preferred mode of transportation is on the rise in the United States. While the overall share of bicycling is still small, between 2000 and 2010, commuting by bike has risen 47% nationally, while Cleveland has seen a 280% increase. The reasons are varied, but people are beginning to realize there are numerous benefits associated with getting around by bike; ranging from health improvements, to cost savings, to environmental concerns (the transportation sector is responsible for a third of all carbon emissions).

Many people are beginning to value transportation choice highly when deciding where to live and work, and young people, specifically college graduates and new professionals are growing increasingly sensitive to the cost of getting around by car (it costs roughly $9,000 a year to operate an average sedan). You might be thinking, “so what?” and have no interest in riding a bike. That’s ok, but the larger benefits of bicycles in the community should be considered.

Studies show that people on bikes spend more money per month at local businesses than people in cars because they stop more often and make more trips. Property values around bike friendly infrastructure tend to increase, while crashes for all road users decrease. Road configurations that help people move around within a neighborhood (not just through it) are becoming more and more desirable because of these benefits. A prominent example of this comes from New York City. In 2012, the NYC DOT found that the construction of a protected bike lane on 9th Avenue saw a 49% increase in retail sales for local businesses, while on other streets in the borough the average was only 3%. They also saw a 58% reduction in injuries to all street users (cyclists, pedestrians, and drivers).

Cities are beginning to take note, and in 2012 the City of Cleveland implemented a Complete and Green Streets ordinance. A “complete street” is a street that considers all road users as part of its configuration (bikes, pedestrians, transit users, and cars) and factors in access and safety in addition to peak traffic flow. The ordinance requires engineers and planners to examine sustainable policies and guidelines in all construction projects within the public right of way. It is designed to create an environment friendly to walking, biking and public transit, while reducing environmental impact by incorporating green Infrastructure.

Lakeshore Boulevard is a grand avenue that connects multiple assets throughout the northeast side of Cleveland, including the second largest lakefront park in the entire city. Yet, rather than being designed as a place the local community can easily traverse via multiple modes of transportation to reach these assets, for a long time cars have been given priority to speed along the corridor en route to other destinations in the name of peak flows and commute times at the expense of all others. Slowing the traffic and making it more bicycle and pedestrian friendly would be an important economic driver for the neighborhood by helping retail and improving property values. A plan has been proposed that will do just that, and part of it includes bike lanes. There will be meetings throughout the winter to discuss it, and I encourage you to attend these meetings and learn more about the proposed plan.

People may have reservations about traffic flow, but the careful studies conducted by City Traffic Engineering prove there is nothing to fear; Lakeshore has a lot of excess capacity these days. Questions about what happens when I-90 backs up have been voiced, but I ask you – do you want Lakeshore to serve local residents, or commuters from Willoughby? I challenge you to consider the state of retail along Lakeshore, and to ask yourself if you’re willing to employ a strategy that has been shown time and time again to boost retail and local economies. Rightsizing Lakeshore for today’s needs makes a lot of sense, and will help those who are already working hard in your community achieve their goal of a strong a vibrant community. Don’t handicap them with a road configuration that has historically done little for the community.

Some people feel that bikes should stay off the road because they don’t pay to maintain them, but that isn’t true. A large majority of cyclists also own cars, and besides, less than half of the funding for our roads come from user fees like license fees and gas taxes. However, it shouldn’t be about bikes versus cars. It’s about the fact that more people are riding, and many more would if they felt safer on the roads (60%). Dedicated bike facilities do just that, and people out riding or walking signal to others that this is a safe and good place to live (much like public parks do). It lifts the status of the entire community. Lakeshore Boulevard is a grand avenue. Let’s design it for people, not cars.

Rob is graduate of Cleveland State’s Levin College of Urban Affairs, where he earned his B.A. of Urban Studies with a planning focus. His coursework dealt heavily with sustainability and transportation issues, instilling in him a passion for revamping our built environment to serve 21st century needs and help legacy cities like Cleveland address decades of decline.