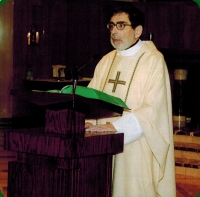 Anthony J. Cassese was born December 3, 1948 and grew up on East 123rd Street in Cleveland’s Little Italy neighborhood.  His mother’s family, the Micatrotto’s, were from Ripalimosani, in the Province of Campobasso, Italy. He was diagnosed with the genetic disorder cystic fibrosis at an early age, requiring daily dose of antibiotics and special treatments every six weeks for the rest of his life. Though the average life expectancy of people with cystic fibrosis is between 37 and 50 years of age, he would become one of it’s oldest survivors, having the longest record of CF treatments at Rainbow Babies and Children’s Hospital.

Father Cassese knew he wanted to be a priest by the age of 8. He would start his schooling first at Holy Rosary Elementary, then Cathedral Latin High. Afterwards he would continue at Wayne State, University of Detroit, and SS Cyril & Methodius all in Michigan. He would be ordained in the priesthood in 1977 in the National Shrine of Our Lady of Czestochowa in Doylestown, PA. While in the seminary in Michigan, he would serve mass to a visiting Polish Cardinal Karol Wojtyla, later to become Pope John Paul II. Fr. Cassese would return to Cleveland to serve the Diocese in 1978, serving as Parochial Vicar for Our Lady of Carmel and St Louis, then Campus Minister of Notre Dame College. On July 28, 1984 he would be appointed Parochial Vicar of St Jerome. He would spend the next 27 years in various capacities until being named Pastor of St Jerome on November 6th, 2006. He would be the fifth Pastor of the church since it’s founding in 1919.

Father Cassese passed at Rainbow and Children’s Hospital Tuesday December 30, 2014 and was interred at Lakeview Cemetery. He was 66 years old.