Vote Yes for the Future of our Lakefront Parks! 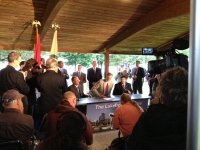 Mayor Frank Jackson terminates the 50 year lease with the State of Ohio of six Lakefront Parks and enters into a 99-year lease with Cleveland Metroparks.

On a quiet, rainy day in June, a historic event took place at the Euclid Beach Park picnic pavilion. Governor John Kasich along with Cleveland Mayor Frank Jackson terminated a 50 year lease between the City of Cleveland and the State of Ohio, relinquishing management of all six parks that comprised Cleveland Lakefront State Park (goo.gl/U6QOJu). Also at the Mayor's side was Cleveland Metroparks CEO Brian Zimmerman, ready to sign into a 99 year lease with the City of Cleveland and assume management responsibility of Cleveland's Lakefront parks including, Edgewater Beach, East 55th Marina, Gordon Park, Euclid Beach, Villa Angela Beach and Wildwood park and marina. Thankfully, this lease was also accompanied by $14 million in state funding that was allocated to Cleveland Metroparks to address additional staffing costs and deferred maintenance in the new Lakefront reservations over the next several years.

None of this would have been possible without years of advocacy by public officials like our very own Councilman Mike Polensek, outspoken leaders in the business community and the vision of Mr. Zimmerman to make Cleveland's Lakefront parks the connecting jewels to the Metroparks' Emerald Necklace. Once the speeches and photo opportunities ended, the park resumed a tranquil serenity along the shores of Lake Erie, as if to say "Our work here is done."  That may be true for the Ohio Department of Natural Resources, but for Cleveland Metroparks, City and County officials and most importantly, community residents, the work has just begun!

Four months later, we can already see the difference in what a Cleveland Metroparks-operated lakefront park looks like: A dedicated beachcomber that cleans Euclid and Villa Angela Beach 6 days a week, rangers patrolling the parks by car, by foot and sometimes by horse, dedicated maintenance staff routinely emptying trash and recycling bins and landscaping once overgrown flowerbeds, and Urban Beach Ambassadors educating park visitors about the importance of taking care of our Great Lake.

These are the surface changes that begin to set the tone and standard for Cleveland Metroparks on the Lakefront. But the challenges ahead are still immense. In an interview with Crains Cleveland (goo.gl/ZY82Lp), Mr. Zimmerman estimates that even with $14 million allocated from the State of Ohio to Cleveland Metorparks, at least $28 million needs to be invested in our Lakefront Parks in the next several years and even more over the next decade to make large scale capital improvement projects a reality. That is in addition to operating and maintaining the 20,000+ acres of other reservations throughout Cuyahoga County including the Zoo. At the current levy of 1.8 mills which draws in $53 million a year in addition to declining property tax values, this is not a sustainable funding course for the park systems' future. That is why the Metroparks Board resolved this summer to place a levy increase on the November ballot.

The levy is a 10 year operating levy and would be a .9 mill increase resulting in a 2.7 mill tax. That only costs a mere $1.85 per week for a $100,000 property. This small increase will draw in about $75 million a year. This combined with fees from golf courses, Zoo admission, and education programming will result in an approximate $89 million annual budget for the park system.

This levy is critical to the future of all Cleveland Metroparks reservations but especially those on the Lakefront. You can read more about Issue 80 at www.ourparksareworthit.com.  We, as park users and residents, have a historic opportunity to continue to support the amazing transformation of our Lakefront parks that began on that rainy day in June. On November 5th, a vote for Issue 80 is a vote for the future of our Lakefront Parks!

But remember, it’s not enough to just vote for Issue 80. Millions of dollars in investment are necessary, but if we cannot take our own initiatives to respect our public spaces and lakefront assets, then shame on us!  Great parks are respected and engaged parks. If we want a better lakefront park system then the least we can do is start showing Cleveland Metroparks that we care! And we can start by simply picking up our own trash or the litter we see in front of us, participating in volunteer activities like the Euclid Beach Adopt-a-Beach(TM) Team's monthly beach cleanups (facebook.com/adopteuclidbeach), or Friends of Euclid Creek's invasive plant pull (goo.gl/GGGOnY), and most importantly, providing Cleveland Metroparks decision makers and City officials with input, criticism, and suggestions for continued park improvements and enhancements.

Let's show everyone that we as a community are engaged and serious about creating a world-class Lakefront!

Stephen Love is a Lake Erie fanatic from Cleveland, OH. In his day job he works for the Cuyahoga Land Bank and in every other waking moment is the founder and coordinator of Euclid Beach Adopt-a-Beach Team and Euclid Beach Blast! He started Euclid Beach Blast out of a desire to explore the connections between environmental stewardship, art, public spaces, music, and community.

Stephen Love is a Lake Erie fanatic from Cleveland, OH. In his day job he works for the Cuyahoga Land Bank and in every other waking moment is the founder and coordinator of Euclid Beach Adopt-a-Beach Team and Euclid Beach Blast! He started Euclid Beach Blast out of a desire to explore the connections between environmental stewardship, art, public spaces, music, and community.