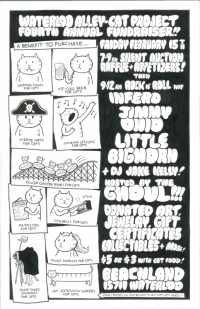 The Waterloo Alley Cat Project is the North Collinwood neighborhood volunteer organization in Cleveland that has implemented the trap-neuter/spay-return method to reduce the number of cats and kittens roaming the streets around the burgeoning Waterloo Road arts and business district. Since its inception in November 2009, the Project has spayed and neutered over 200 cats and has garnered the support of municipal officials, residents and local businesses.  Debbie Gulyas, business owner and Waterloo Alley Cat Project volunteer, remarked, “The cat population in the neighborhood is now decreasing and we have saved the lives of many cats. Through teamwork, our mission is to improve and protect the lives of all feral cats; and teach that all life is connected.”

In neighborhoods throughout the U.S., trap-neuter/spay-return programs (TNR) have proven to be effective in humanely managing feral and stray cats while at the same time reducing their population.  With TNR the cats are trapped, spayed or neutered, vaccinated for rabies, left ear-tipped (the universal sign that a cat is fixed) and, if feral, returned to their original territory.  A trained caretaker then provides food and shelter, and watches for newcomers. February is World Spay Month; an annual campaign of The U.S. Humane Society that shines a spotlight on spay/neuter. World Spay Month provides a unique opportunity for everyone who cares about animals to get together toward a common goal — to end the euthanasia and suffering of companion and homeless animals.

On Friday, February 15, 2013, Waterloo Alley Cat Project is hosting its 4th Annual FUNdraiser at The Beachland Ballroom, 15711 Waterloo Road. The night will begin at 7 p.m with a basket raffle and silent auction, emceed by the legendary TV personality The Ghoul and DJing by artist Jake Kelly. Over 30 fabulous items have been donated by local artists, businesses and individuals; and local restaurants will be donating appetizers. Following the raffle and auction, there will be a concert at 9:30 p.m. featuring 3 bands: Infero (Cleveland), Jimmy Ohio (Detroit), Little Bighorn (Cleveland). Admission for the night will be $5 or $3 if you bring cat food, canned or dry. This major event determines how much the project can do for the rest of the year to help the neighborhood stray cats. 100% of the money raised goes to the care of Waterloo cats.  Tax deductible donations can also be made to: Northeast Shores Development Corporation, P.O. Box 19246, Cleveland 44119 and mark in the memo Waterloo Alley Cat Project.

Debbie Gulyas is a Waterloo Road merchant (Blue Arrow Records and Boutique and This Way Out Vintage Shoppe in the Beachland Ballroom and Tavern) who also volunteers for the Waterloo Alley Cat Project.

Debbie Gulyas is a Waterloo Road merchant (Blue Arrow Records and Boutique and This Way Out Vintage Shoppe in the Beachland Ballroom and Tavern) who also volunteers for the Waterloo Alley Cat Project.